Hearing the Voice of God 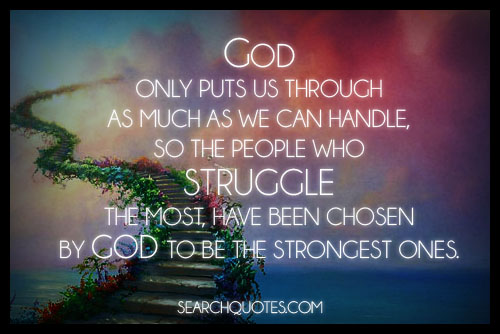 A woman had a dream.  She saw three women kneeling in prayer.

Jesus walked up behind them and at the first woman He stopped, laid His hands on her, and spoke gentle, encouraging, loving words.  The woman having the dream thought how much He must love her and how pleasing she must be to Him.

Then He came to the second woman.  He paused only a few seconds, barely touched her and moved on, and the woman thought, well; He loves her too, but not like He does the first woman.

Then He came to the third woman.  He hardly glanced at her, spoke no words, did not touch her and the woman thought how the third woman must have grieved her heart that He walked past her never said a word and He totally ignored her.

Then the Lord spoke to her that she had it wrong.  The first woman was a new Christian, a babe in Christ.  She was weak and needed all the attention He could give her.  So He did.

The second woman had walked with Him for a while and did not need so much attention as the first woman did.  She only needed an occasional word or touch from Him now and then.

But the third woman had walked with Him for a long time, and He knew He could trust her completely.  As a mature Christian she did not need that constant love and attention; she knew that He was always with her no matter if she FELT HIM or not.    Hmmmm…..

1 Response to Hearing the Voice of God